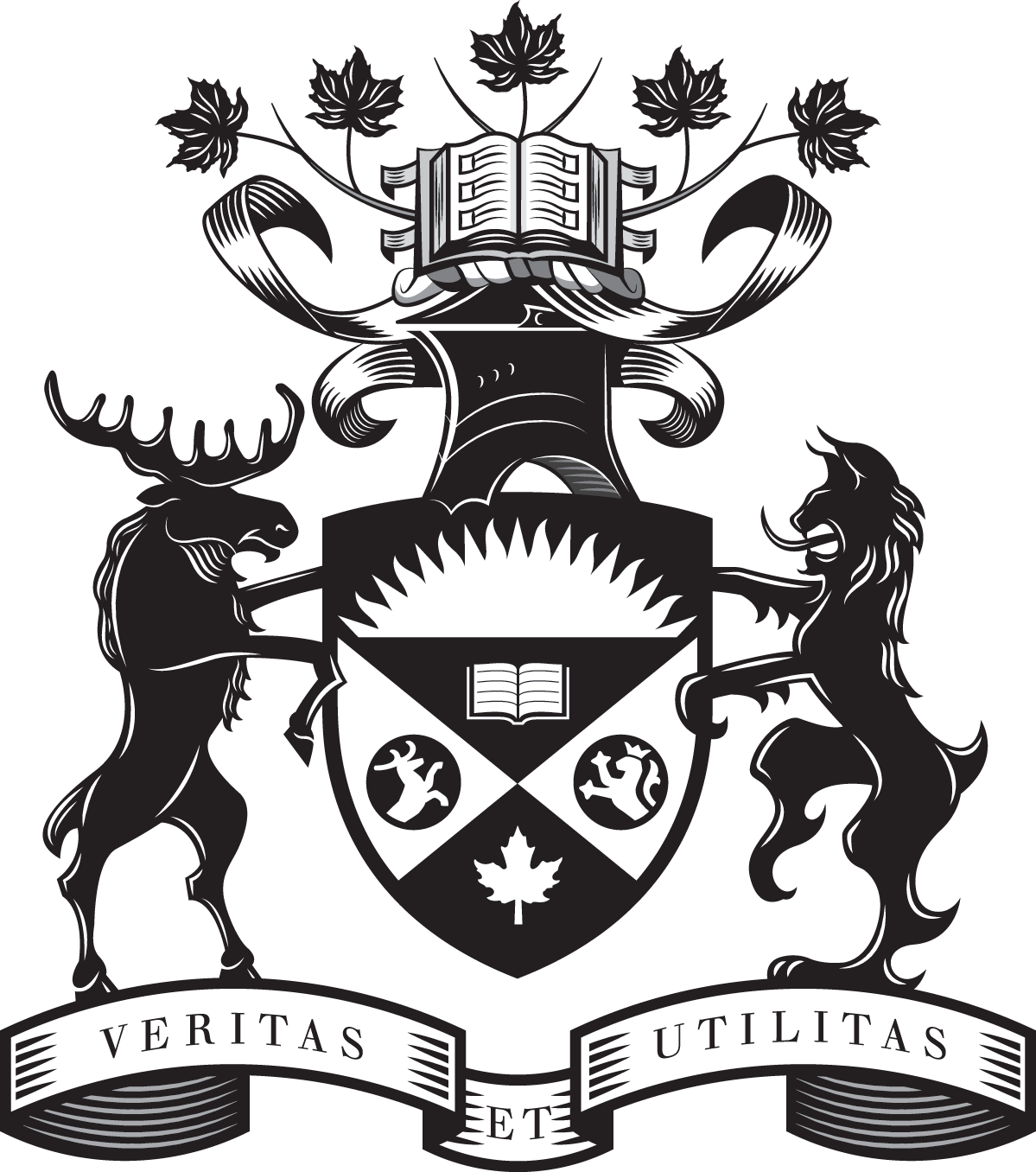 The coat of arms of The University of Western Ontario was granted by the College of Arms in 1931. It is the third coat of arms to be used by the University but the first to be officially recognized. Western had its origins in Huron College, founded in 1863 by the Bishop of the Anglican Diocese of Huron. It is not surprising that, upon its creation in 1878, Western would adopt a coat of arms similar to the Diocese of Huron. In 1908 the coat of arms was altered to denote a change in Western's affiliation to the City of London and the Province of Ontario.

In traditional heraldic terms the official description of the present coat of arms reads:

Per saltire Purpure and Argent

In Chief an Open Book proper edged and Clasped Or

On a Chief of the third a Sun Rising Gules

And for the Crest: on a Wreath of the Colours in front of a Branch of Maples Gules an Open Book as in the Arms

Supporters: On the dexter side a Moose and on the sinister side a Lynx both Or

The University of Western Ontario armorial bearings, or arms, consist of three distinct units: (1) the shield, (2) the crest, and (3) honourable, but secondary additions, the supporters and the motto. The shield, with its design, is the single most important element. It is the core of the arms, so to speak. Since the shield design was frequently transferred, in earlier times, to the tabard or coat, worn over armour, the arms came to be called the coat of arms.

The shield's main surface, or field, is divided into a St. Andrew's diagonal cross, the so-called saltire, with purple segments at the top and bottom of the field, and silver segments at each side. Naturally, because literal silver is often difficult to reproduce in colour, white is always an acceptable alternative to silver. The University of Western Ontario colours thereby become white and purple (the correct order of colours in the crest wreath), or in the words of the University cheer, purple and white.

In the purple segment at the top of the field is an old-fashioned open book, with stylized writing, portrayed in natural colours of black and white, but with gilded edges and clasps on each side of it. On the purple segment at the base of the shield is a silver stag, trotting with one fore hoof raised, within a silver ring. In each of the lateral silver segments is a blue disk, surmounted by an ermine coloured demi-lion with a forked tail and a simple golden coronet showing three fleurons. The demi-lions are shown issuing from the base of each disk. All these motifs, or charges, are drawn so as to comfortably fill out their respective segments of the field, without looking pinched.

Added to the top of the shield is a gold panel with a red, stylized rising sun. Yellow is always an acceptable alternative to metallic gold colour. The sun was originally thought of as a "westering", or setting, sun to pun on the name of the university, but was officially blazoned as a rising sun in the 1931 grant from the College of Arms. This upper panel is called the chief of the shield.

The crest, a device or object sitting on the helmet which is placed above the shield, is the second-most important unit of the arms. A shield of arms may exist without a crest, but properly speaking, a crest does not exist, except as part of a coat of arms, even though it may occasionally be shown by itself. Western's crest consists of the old-fashioned open book from the upper segment of the field, sitting in front of a stylized sprig, or branch, of red maple leaves, joined to the top of the helmet by a wreath of six twists of silver and purple. The helmet is further trimmed with an ornamentally slit neck cloth, or mantling, in The University of Western Ontario colours (i.e., purple, turned silver), but this is only a decorative part of the arms.

The rampant supporters, a golden moose at the dexter side of the shield (the viewer's left), and a golden lynx at the sinister side of the shield (the viewer's right), though granted as an additional distinction to the university, belong to the least important unit of the arms. With the slittered helmet mantling, and the stylized compartment, or grassy mound of earth on which they stand, they provide an ornamental finish to the armorial design. These particular armorial beasts seem to have been chosen for their characteristically Canadian associations. The motto, veritas et utilitas, which may be translated as "truth and usefulness", also falls into this tertiary unit of the arms.